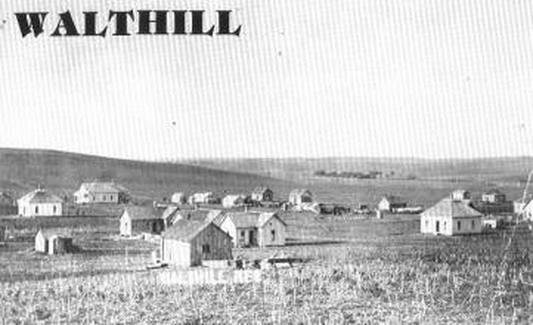 Walthill, named for a man by that name, was the creation of the Chicago, Burlington & Quincy Railroad that ran a line up through Thurston County in 1905. [Nebraska State Historical Society].
The Village of Walthill is located near the center of the Omaha Indian Reservation that encompasses more than half of Thurston County. Near the turn of the century, the thousands of acres of fertile prairieland were passing intocultivation and there was a need for an outlet for products, as well as a home-market for the purchase of daily necessities.

A railroad, the Chicago, Burlington & Quincy, built a branch line from Sioux City to Fremont in 1905. It missed the "Quinton" settlement, whose post office was established in 1892, by several miles. With the route established and rails being laid, the postmaster, C.H.Taylor, put his small post office and store up on wheels and pulled it to the rail head, locating it on the highest point. He worked out of these temporary quarters until an iron-covered building was completed and ready for occupancy.

The name of the post office was changed to "Walthill" on June 15, 1906. It was chosen "to honor Walter, son of James Hill, builder of the Great Northern Railroad." Walt Hill, himself, worked for the CB&Q that built the line and, together with a Mr.Hutchins, had organized the town site company.

After the town site was designated, Harry Keefe went to Oklahoma to get the title for the west 40 acres from John Aitkin. The east 40 acres was part of the allotment of Joseph Merrick, an Omaha Indian, for which the government, with Merrick's consent, had approved. The town was built on the large rolling hills of northeastern Nebraska. Main Street, however, was not laid out on the section line, since the contour of the land was such that a level street could not be established there.

The town marks its official beginning on May 22, 1906, the day of the great lot sale. In typical railroad-town fashion, Walthill grew very fast, incorporating on December 10 of that year. It should be noted that "Winnebago," located eight miles north (on the Winnebago Indian Reservation), although established at the same time and of nearly the same size, never sought incorporation status, nor has the smaller reservation-town of "Macy," east and south of Walthill.

Dr.Susan LaFlesche Picotte, first native American woman physician in the USA, came from Bancroft in 1907 to establish a hospital. Graduating at the top of her class from Women's Medical College in Philadelphia in 1889, she came from a remarkable family. Her father, Joseph LaFlesche, was the last traditional chief of the Omahas. Her sisters, Rosalie and Susette ("Bright Eyes"), and a brother, Francis, were each famous in their own right. While they lived much of their lives off the reservation, Susan chose to bring her talents and skills home.

Dedicating her life to her people and to improving the communities of which they were a part, she worked for community health education, sanitation, and prohibition. She also lobbied for better land policies and Indian civil rights. Committed to the need for a hospital on the Reservation, much of her career was spent on foot or horseback, making house-calls to those in need. Her dream was realized when a 39-room hospital was built "...to serve all, regardless of ability to pay." After her untimely death from cancer in 1915, the hospital continued for another 30 years, then became a nursing home, a family health clinic, and finally a private residence. A committee was formed in 1988 to purchase the building. In 1989 the Susan LaFlesche Picotte Center, now on the National Register of Historic Places, was dedicated, and houses many photographs and artifacts from the life of this remarkable lady.

Life in a small reservation town is unique and interesting. Because of its location, Walthill's residents are a unique blend of Native Americans and descendants of early white settlers from French, Germans, Swiss, and Swedish lineage. The population peaked at 1,204 in 1940, with the 1980 census recording 854. There are five churches. The K-12 school provides education for approximately 300 students.

The elevators at Walthill continue to utilize the railroad to transport many tons of grain to market, and provides employment for the predominately agricultural community. While it is an incorporated town, the village is governed primarily by tribal rules and laws.